Computers have an impact on every industry into which they are introduced and the construction industry is no different. Bennett and Francis adopted CAD in about the mid-1980’s, if memory serves. I can still smell the ammonia from the Diazo printing machine we used to reproduce hand-drawn plans, then pen plotted films … how far we have come!

Surveying and construction are about to change again with the introduction of Building Information Modelling .. or BIM.

From the US National Building Information Model Standard Project Committee has the following definition (see more on Wikipedia):

Building Information Modeling (BIM) is a digital representation of physical and functional characteristics of a facility. A BIM is a shared knowledge resource for information about a facility forming a reliable basis for decisions during its life-cycle; defined as existing from earliest conception to demolition. 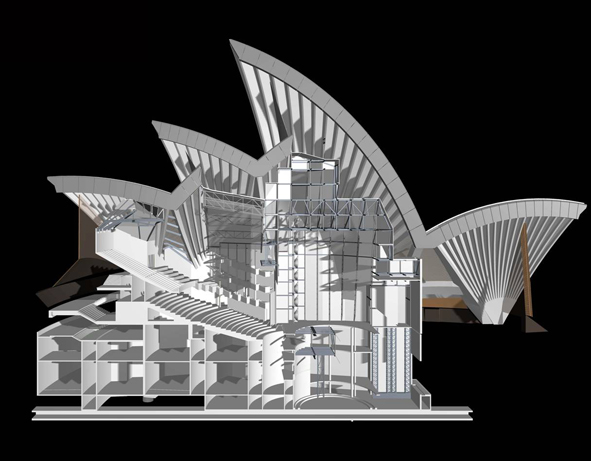 Surveyors are the first on site and the last to leave. Traditionally surveyors would be called in before the design phase to capture a snapshot of the site – above ground features, contours, buildings, trees, underground services – whatever was required by the architects and engineers. During construction, surveyors are called upon again to accurately position the construction elements. Finally – surveyors pick up where things were actually built to form part of the documentation of the project handover (a bloody good idea at least – especially pipes!).

For the last few decades, the equipment involved was a total-station theodolite – basically a device that can measure distances and angles. Lately, innovations including making those devices robotic – so one person can operate them.

The details of the survey are recorded in on-board memory cards. We return to the office to process that data, incorporate information from documentation and produce a plan .. a piece of paper or a PDF. Some of our clients are also comfortable with digital files (eg AutoCAD) which they can incorporate into their own workflows. This line work may or may not be in 3D.

The next generation of software and survey hardware however has the potential to offer so much more. From the definition of BIM above – note that it is just not about construction – it is the entire lifecycle of a project. BIM resources become the “manual” as it were for the project. If kept up-to-date and complete – the full potential of BIM can be realised. There is no need to get the surveyors back for the renovation design – you will already have that data.

Computers have also made the job of storing a significant volume of data much easier – especially of 3-dimensional models and point clouds.

When a surveyor uses a total station to snapshot your project, he/she will use their experience to determine what points to measure. A “gun” surveyor might pick up ~600 points in a day – again, these are things like ground levels, road signs, stairs and building footprints, kerb and channel or manholes. A more recent bit of kit though is leading the way on a branch of surveying called high-definition surveying (HDS). The main device employed in HDS is a laser scanner. It works by spinning around 360 degrees in both the horizontal and the vertical to literally “scan” the surrounds where it is set up – and it does this awfully comprehensively. Scanners can capture millions of points per second, leading to a very large data file in the order of billions of points. The points can be less than a millimetre apart at 10m from the device.

A recent famous building underwent scanning – the Sydney Opera House – as part of the Scottish Ten project. The final point cloud was over 13 billion points and 56,000 images were also taken by the scanners.

From this vast amount of data – information can be extracted. Information in the form of a 3D model – say in Revit. You can also measure between points in the model – say the width of a wall or the length of a bath – or inquire on the point to get its elevation.

Modelling is certainly not easy – there is a fair amount of work to convert to a full Revit model – but that model can be used for design.

As surveyors, we are keen to know how clients want to use our deliverables in their BIM workflows. So – if you are already using BIM, or are looking to get started – we are very keen to talk to you and see how we as surveyors can assist.

The role of the surveyor might be changing as a result of this technology. We want to know what sort of data you need for your own process. Are surveyors going to be measuring and delivering registered point clouds (all device set ups on one coordinate system), or are we going to be called upon to do some modelling or perhaps integrate data from other sources, like underground service searches. Are project managers interested in as-constructed records of this form? As part of the building project – point clouds can be loaded into Revit to analyse construction clashes and more.

If you are an architect or engineer already using Revit – have you considered adopting point cloud data as part of your process?

We would love to hear from you.

The Queensland Government Redevelopment Precinct covers and area of over 175,000 square metres, involves over a dozen buildings and several roads in Brisbane’s CDB.

Bennett and Francis was engaged by the Queensland Department of State Development, Infrastructure and Planning to carry out a detail and level survey of the area as well as an investigation into the underlying cadastre, easements, ownership, heritage register and any other pertinent registers as a kind of “due diligence” report.

The detail and level survey was presented in both CAD and “fair-drawn” PDF format (both plane coordinates and MGA).

The “investigation however was another matter. Traditionally we would present this form of report as a “written” PDF – noting encroachments and other issues, a full description of improvements, attached copies of titles, survey plans and much more.

Given the extensive nature of the site and the number of parcels involved, we consulted our internal Information Technology team to come up with something a little smarter to help the client and consultants visualise the site and to be able to quickly drill into important documents in a user-friendly manner.

We turned to Google Earth. A custom Earth file (kmz) was authored to present the information in a graphical format that users could explore. It proved very easy to use – even being given to proponents to assist with the various bidding processes.

We also created a layer of over hundreds over photos taken with a Canon EOS 1X with the GPS module. This allowed us to position the photos on maps where they were taken, including location, orientation and altitude.